This will be my final regular post on Needless Things for the foreseeable future. Thanks for your readership over the years and please continue to check out the Needless Things Podcast every single Friday on Podbean!

As always, the understanding here is that “Best” means “My Favorite”. It’s just easier to say “Best”.

Best Movie – Us – Jordan Peele’s sophomore directing effort was a masterpiece of suspense and macabre situational tension. I thought about it for weeks after I first saw it, I’ve watched it several times again, and I’m still thinking about it today. This movie engaged me like no other film this year.

Check out my review, our podcast and the excellent Seeking Human Victims podcast for more! 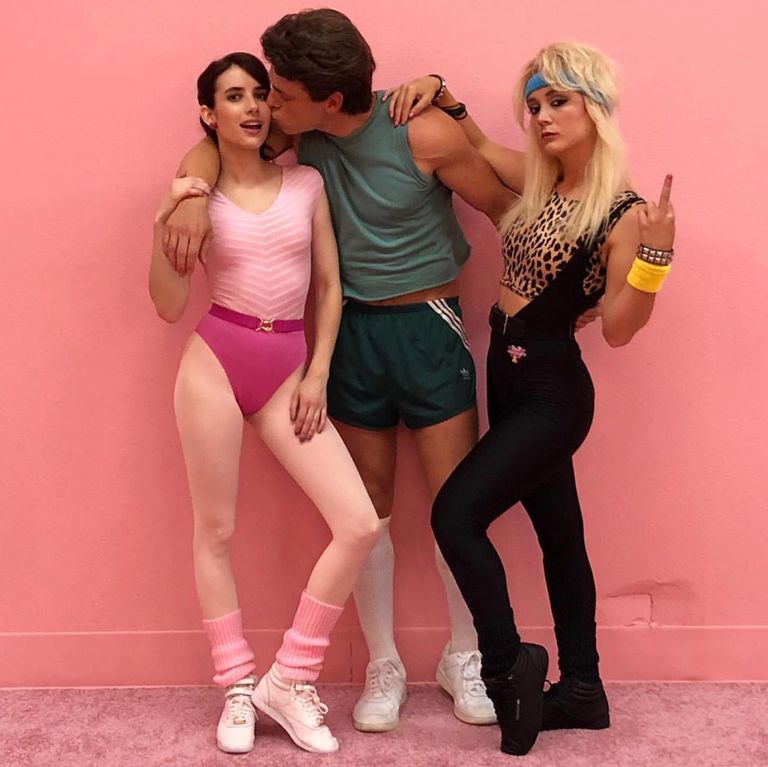 Murder House and Hotel were both fantastic and 1984 has equaled, if not surpassed, them. It maintained the level of fun and insanity consistently throughout the entire season. I’m sure part of its success comes from the reduced episode count, but the cast and a bonkers plot made for a memorable new season.

For me, the MVP of the whole thing – and of most things she’s in – was Billie Lourd. She can subtly emote as well as she devours scenery and commands every scene she’s in. 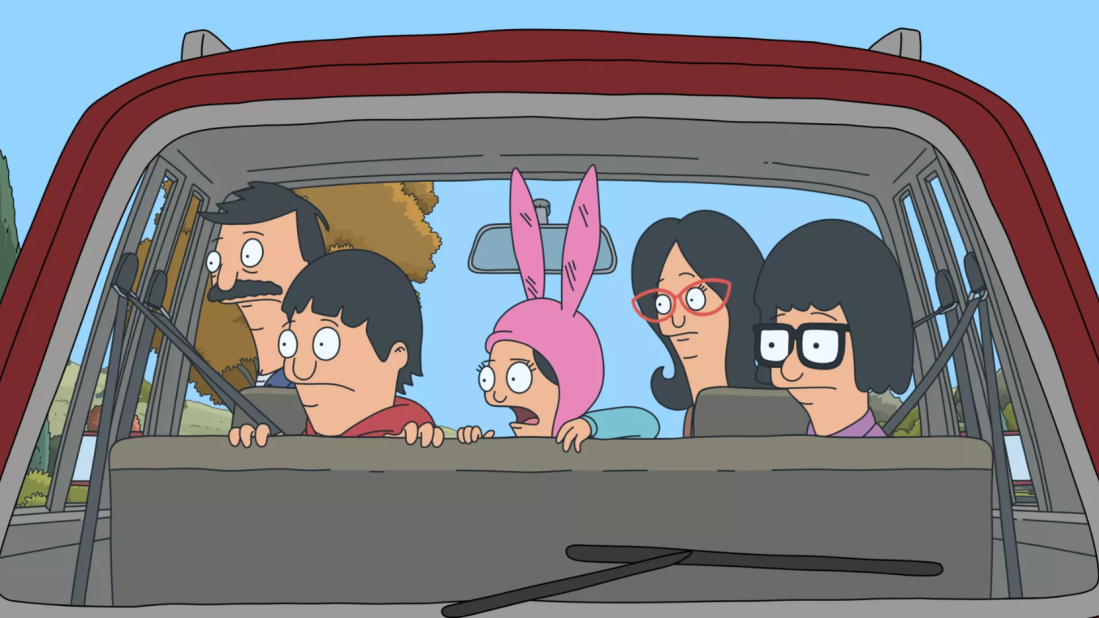 Best Animated TV Show – Bob’s Burgers – This show is consistently great. It’s probably my favorite show on TV now, but I split it off into animation just so I could pick something else. Best Streaming Show – The Dark Crystal: Age of Resistance – This isn’t just my favorite entertainment experience of 2019, it’s one of the most impressive creative accomplishments of my lifetime. Every character, every episode, was thoroughly engaging. I’ve watched it twice now in an attempt to absorb every detail and still don’t feel like I’ve truly comprehended the full scope of this series. Best Family TV Show – DuckTales – I couldn’t stand the animation at first, but the voice acting and storytelling are so superb that I’ve made myself get used to it. I also think that it’s gotten a bit better since the first episodes.

The show manages to hit the right combination of modern story arcs and classic episodic adventures, which is a difficult thing to do. More than anything its pacing and cleverness reminds me of one of the greatest animated series of all time, Gravity Falls. Best Comic Book – Star Wars from Marvel – I looked forward to every single issue of this title. Kieron Gillen started 2019 with his ongoing story that culminated in one of my favorite stories ever – The Scourging of Shu-Torun. I was concerned about a shift in creative teams, but Greg Pak brought the run to a satisfying conclusion with issue #75, ready for the events of The Empire Strikes Back.

I stopped buying comics after that issue came out and the one nagging problem I have is that Marvel is launching a new Star Wars book set to take place between Empire and Jedi. This first series was so immensely satisfying and felt like such a great part of the Saga that I’m not sure I’ll be comfortable skipping the follow-up.

Best Wrestling Show – NXT – NWA Powerrr is in second place, but without a live weekly show I don’t feel the same urgency to watch that I do with NXT.

Every single week NXT delivers the kinds of matches that I find exciting from the kinds of performers that I find compelling. There hasn’t been a lull this entire year and the powers that be have gotten very good at filling spots when performers are out for one reason or another.

Takeovers are regularly the best “PPV” events that somehow top even the action of the weekly shows. Not only that, they tend to deliver storylines and resolutions in a way reminiscent of the pay-per-views of the past, providing closure and new beginnings when needed.

SmackDown, RAW, and AEW Dynamite don’t even come close to entertaining me as much as NXT’s weekly show. And that goes way back to the beginning of the year, not just since the USA debut. Best Wrestler – Shayna Baszler – This one was tough because so few performers had a consistent year. Injuries, booking hiccups, and just plain leaving kept some of my top picks – Becky Lynch, Ronda Rousey, Tomasso Ciampa, AJ Styles, Asuka – out of contention. Even Matt Riddle, who I would have sworn would finish the year strong, has been somewhat supplanted by Keith Lee.

But the Queen of Spades, Shayna Two-Times, has been delivering 110% for a very long time now, including her over 540 days as NXT Women’s Champion. Everything she does looks real and she has all of the little things down. Her matches tend to be the best ones on the card. Every week she’s the one I’m waiting to see.

Best Toy – Star Wars: The Vintage Collection The Khetanna from Hasbro – C’mon, you guys. Nothing else can even compete.

Check out our episode reviewing it with Victoria’s Cantina. 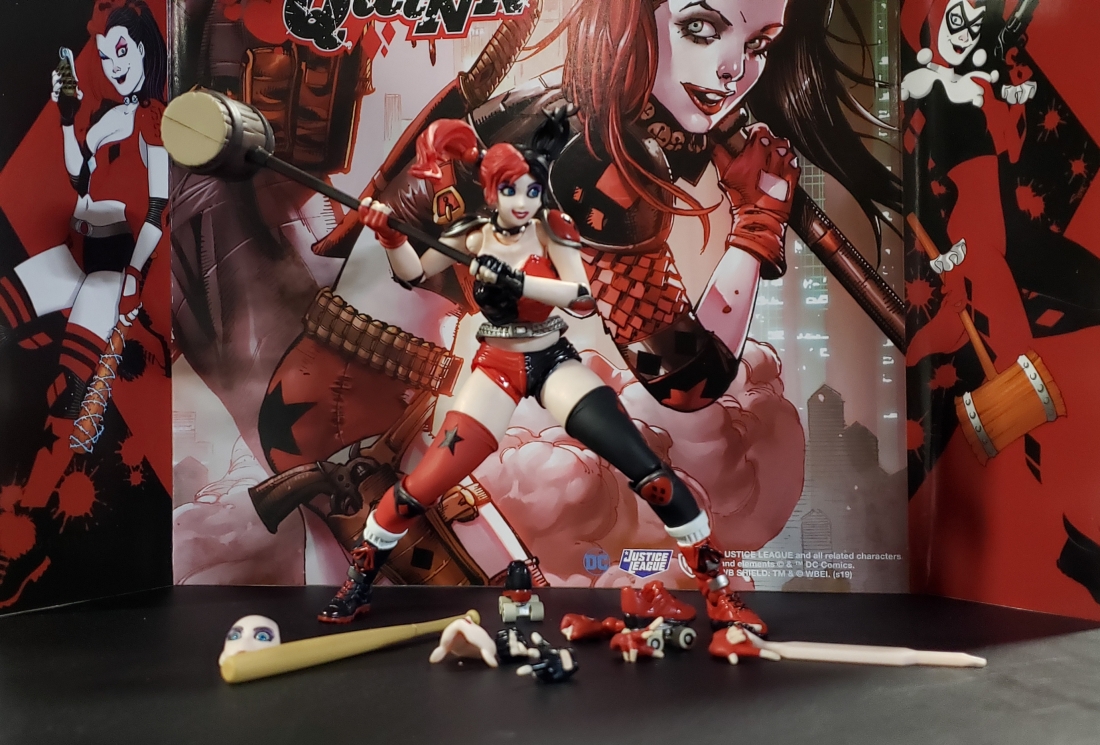 Best Action Figure – DC Comics Amazing Yamaguchi Revoltech No. 015 Harley Quinn from Kaiyodo – Shockingly, a last-minute release swept in on December 27th and knocked every other possibility out of contention. With prejudice.

I don’t buy a ton of import toys, but you guys know I love my Harley figures. This one looked to be both different and high quality, plus it’s from a line that I’ve heard a lot about. I like trying new toys.

This Harley is not just the best action figure I bought this year, it could well be the new best action figure I’ve ever owned. The sculpt, profile, and paint are immaculate, there are plenty of accessories and the articulation is like nothing I’ve ever seen before. This figure can be posed in almost any way an actual human can and the disruption of the profile is minimal. These are the best joints I’ve ever seen.

THE GOSHDARN EYEBALLS ARE ARTICULATED.

If you’re willing to shell out a bit for an action figure that puts all others to shame, order this Harley. Or maybe try another Amazing Yamaguchi figure. There are other characters like Spider-Man , Wonder Woman, and even Optimus Prime!

Since this winner came so late in the game, I had already written up another one. Might as well leave it in… 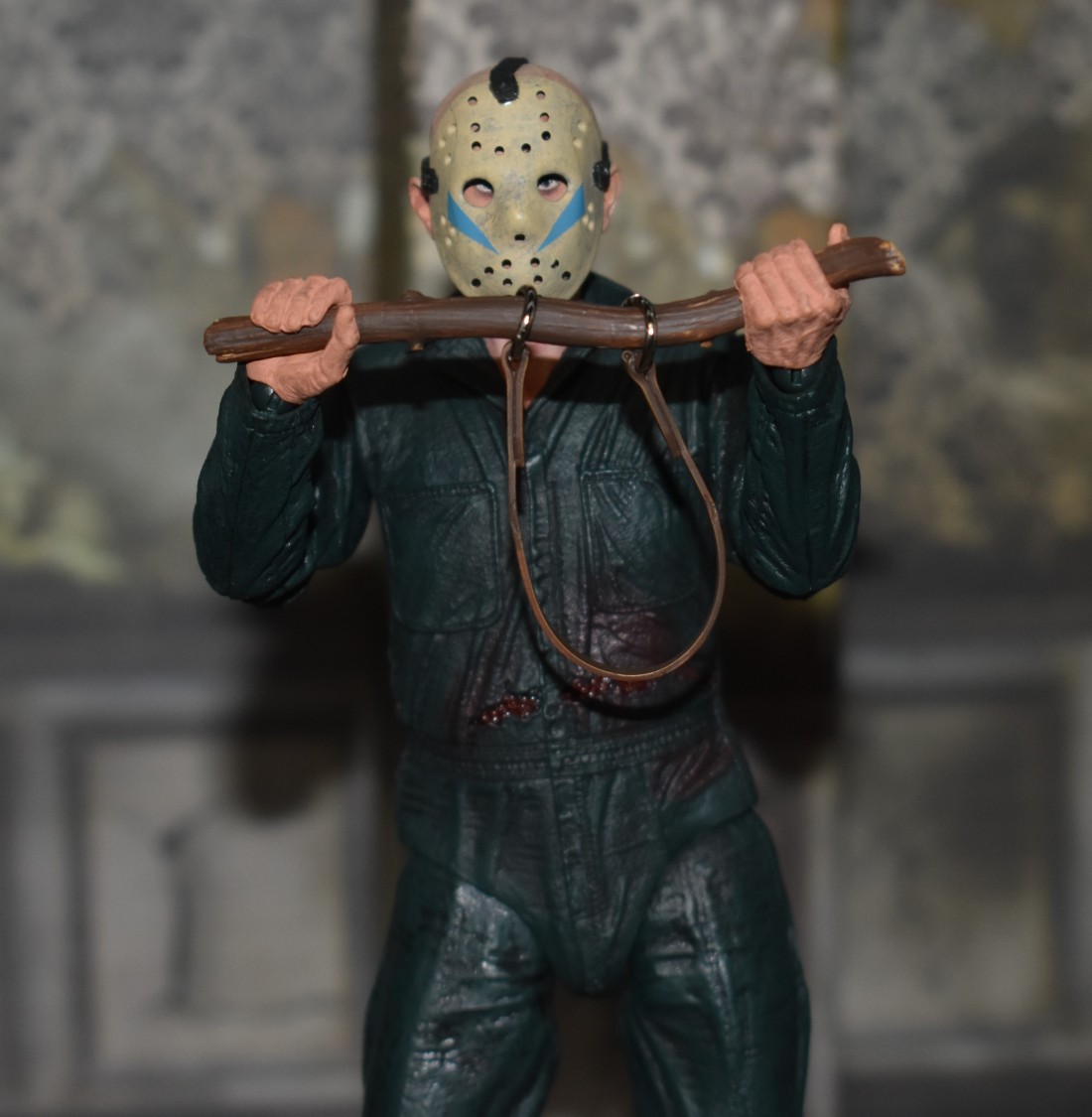 Runner-Up Best Action Figure – Friday the 13th Part V: A New Beginning Ultimate Roy Burns from NECA – I can’t believe I’m saying this, but I loved this figure when I opened it and when I look back on the year I realize it’s the action figure that got the biggest and best reaction out of me. It also stayed on my desk the longest. It delivered everything I could possibly want from a Roy Burns action figure, and while that might sound a little silly, it’s a big deal. 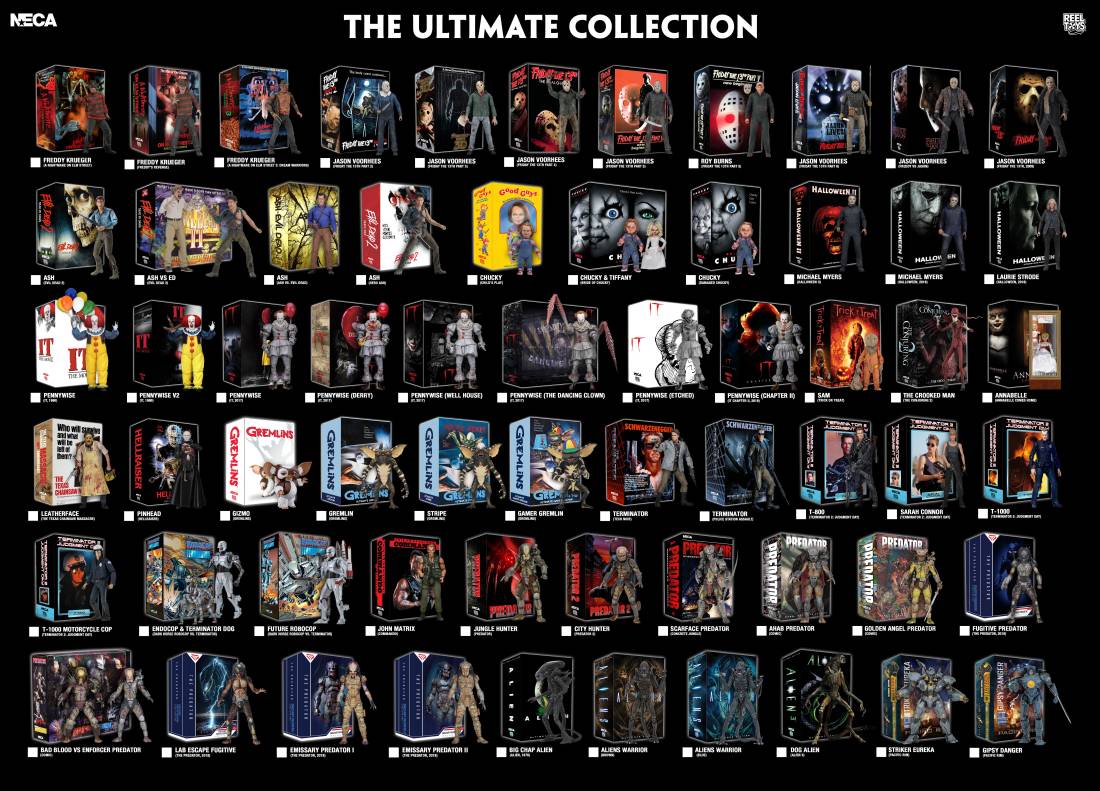 Best Toy Line – Reel Toys Ultimate Collection from NECA – No other toy line consistently brought me as much joy in 2019 as this one did. I didn’t buy every release, but I bought a lot of them and there wasn’t a single one that disappointed me. At least, there wasn’t one that disappointed me at the time that I bought it. Later on when they released more Ultimate editions of the same character that revealed the last release to not be so Ultimate I might have felt let down, though.

But overall NECA’s Ultimate line truly lives up to the name and provides excellent figures of the characters we love, along with piles of accessories. At this point NECA has snuffed many of their lingering quality issues and has found a great balance between aesthetics and articulation. They are, beyond a shadow of a doubt, creating one of the best action figure lines in the history of the medium.

HONORABLE MENTION – Star Wars: The Black Series from Hasbro, Batman/TMNT from DC Collectibles, One:12 Collective from Mezco, Fortnite from Jazwares, ReAction from Super 7

Best Toy Retailer – BigBadToyStore.com – Look, I’m not gonna lie – I didn’t buy a whole lot from BigBad this year. Most of my purchases were split pretty evenly between Target, Hasbro Pulse, and Amazon with a smattering of Ringside Collectibles.

Target gets restocked as often as horror movies win Oscars. Hasbro Pulse started off strong, shipping figures to its customers long before retailers got them, but as time went on the shipping got later and later to that point where I was seeing figures at freaking Walmart before they even got out of “Preorder” status. Amazon is mostly okay but sometimes cancels preorders and likes to ship figures in bubble mailers so they get crushed.

Ringside is mostly great, but only sells wrestling figures.

If I know I absolutely have to have a toy, BigBad is where I go. Their preorder system that allows you to cancel anytime and adds products to a “Pile of Loot” so that you can ship them all at once and save is great. Plus they have five dollar super saver shipping if you’re not in a hurry.

As far as their products, they offer pretty much everything, though usually at a slightly inflated price from what you’d see at other retailers. And everything arrives in pristine, mint condition. 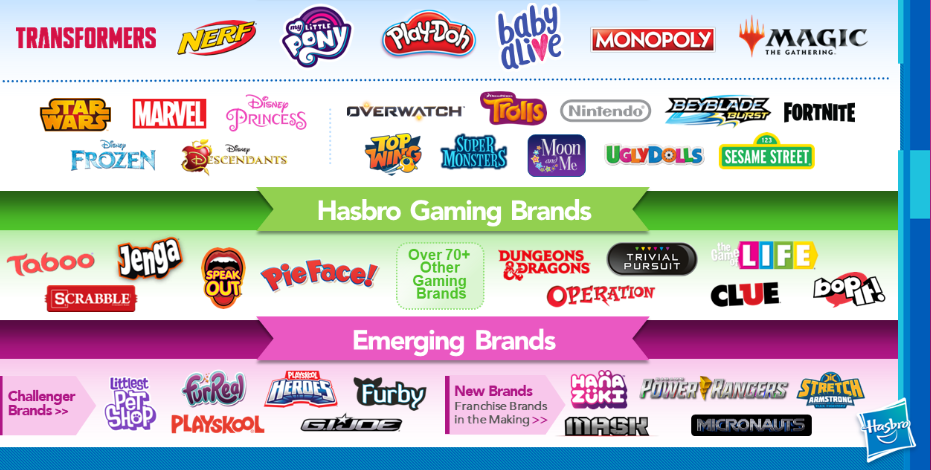 Best Toy Company – Hasbro – Once again I have to give it to them for offering the widest variety of products that I am into and doing a good enough job of it to keep me happy. And for the most part they do it in a timely manner.

Marvel Legends and Star Wars Black Series are great action figure lines and the fact that there are others that are even better just shows what kind of golden age (for licensed products) we’re in right now. The current War for Cybertron line of Transformers is absolutely fantastic. I sold mine because I just can’t support another line right now, but every time I see them in the store I’m impressed with the design and variety of characters.

Sure – the various Star Wars lines are in disarray. Major characters have been appearing in the Vintage Collection and not in Black Series and vice versa. But from what I understand that’s more Lucasfilm/Disney’s fault then Hasbro’s. I think they mostly do the best they can with what they’re permitted to do.

If I average out my personal satisfaction with the cost of a toy, Hasbro hits the mark the best out of any company.

HONORABLE MENTION – Super 7, NECA, LEGO (everything they do is wonderful, but I don’t collect LEGO)

Be sure to join the Needless Things Podcast Facebook Group and let us know what you’re watching!