Thanks to the internet and collectors’ voracious appetite for any and all toy news it’s not often that I am taken by surprise in the wild by a completely new toy line. Not one that interests me, anyway.

Today’s subjects mark the second time that Phat Mojo – the toy company with the most 1998 name ever – has snuck something into the retail scene that I had no idea was coming. The first was an entire wave of Pennywise figures in this same style from IT: Chapter Two. I thought that was an odd decision, but whatever.

These figures are a whole other proposition, though.

The Office is one of the greatest sitcoms of all time, and while I never thought of the characters as particularly toyetic, this is the sort of line that collectors and casual fans alike can enjoy. The figures are simple, recognizable, and priced right(ish).

Michael was at the front of the peg and I’m happy to have him, but Dwight was the one that sealed the deal. He’s the hero of the show and I probably wouldn’t have bothered with these if the third figure had been Toby or – ugh – Ryan Howard.

Ryan Howard is the absolute worst. What a jerkbag.

Pam was also available, but as adorable as Jenna Fischer is both as the character and, apparently, in real life, I cannot condone Pam’s relations with the villain Jim Halpert. So I picked up Michael and Dwight and brought them home for review.

Would the legendary NBC show have been better off with larger figures from the likes of McFarlane or NECA or does it turn out that four inches is enough (that’s what she said)? Read on and find out!

Target puts these in their collector’s section – the one back by the electronics – which means products need to stand out against an unbelievable catch-all wall of pop culture crap. That section is a veritable wasteland of fads and wannabe-trends that is often in a shameful state of disarray because the poor Target associates have no idea what to do with it and the special merchandisers who are meant to take care of the section apparently show up about twice a year.

These relatively simple but eye-catching blister cards did their job, because I was walking away after examining a mostly-barren NECA shelf when these guys caught my attention. The black nameplate against the sky blue background provides a nice contrast and is immediately recognizable branding to fans of the show. While the figures and photos are kind of secondary to that initial impression, it does help that the packaging is designed with a generous figure-to-cardback ratio. To my eye it doesn’t help products at all when they are dwarfed by their packaging.

I don’t generally care for multilingual livery, but for some reason the French text is amusing and seems weirdly appropriate, regardless of how utilitarian it is to the products.

The backs of the cards feature quotes from the characters as well as an image of another available figure. I don’t know why they didn’t just put all three on there and have a single shared cardback image.

The cardback is a little thicker than some other toys out there right now, which I appreciate. Sure – I’m going to rip these open and throw the packaging in the trash. But there’s no reason for the product to end up looking like ass while it’s still in the store. I appreciate good, sturdy cards.

The figures are secured in standard plastic trays. Once you open the blister they and their accessories pop out easily.

This is a good design. Classic action figure stuff. It occurred to me that the blisters could be smaller, but the larger size probably helps with overall integrity. 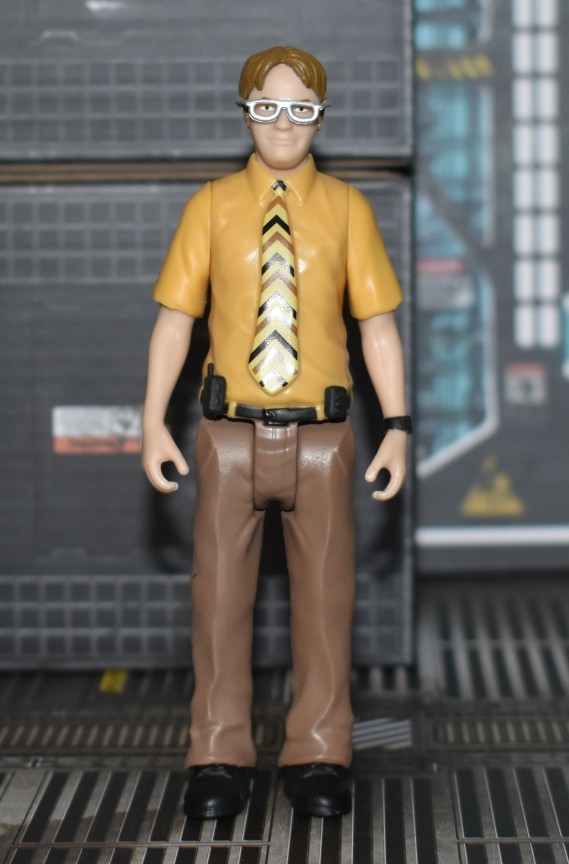 So many collector-oriented action figure lines are going the retro route now and emulating Kenner’s classic 3.75” Star Wars line. I like those and there’s some really great stuff happening in that format, but I was excited to see that these are something a little different.

To me these are very reminiscent of Fisher-Price’s Adventure People, a toy line that in this day and age doesn’t receive as much adoration as classic Star Wars, but was just as prolific in its time (1975-1985).

These figures are a little thicker and chunkier, with likenesses that are much more action figure-y than realistic. In a weird way, they feel to me like in-universe toys that were made based on the documentary that was being shot; they’re intentionally toylike.

Of course, Steve Carell kind of looks like an action figure anyway.

The sculpts are simplistic, but have an almost exaggerated feel. Wrinkles and folds in clothing are large and noticeable, giving the figures an extra tactile dimension that makes them fun to handle. The colors are all solid and bold, with no washes or highlights. All of these elements together are what give them that Adventure People feel. 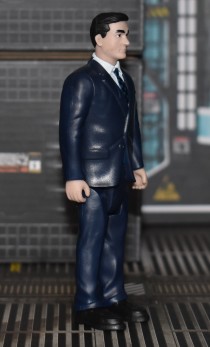 Both figures have cut joints at the neck, shoulders, hips, and ankles. The arms a bit different, as Michael has wrist swivels where the hands attach to the arms and Dwight’s are joined above the elbows due to his short sleeves. This actually gives Dwight a bit more expressiveness since his slightly bent elbows are included in whatever arm-swiveling poses you may choose.

This simple articulation results in sturdy, playable figures. Both can sit down and Michael’s hips were articulated a bit low to accommodate the hanging hem of his suit coat. 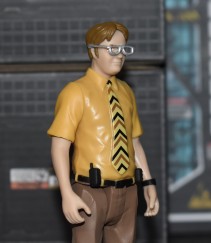 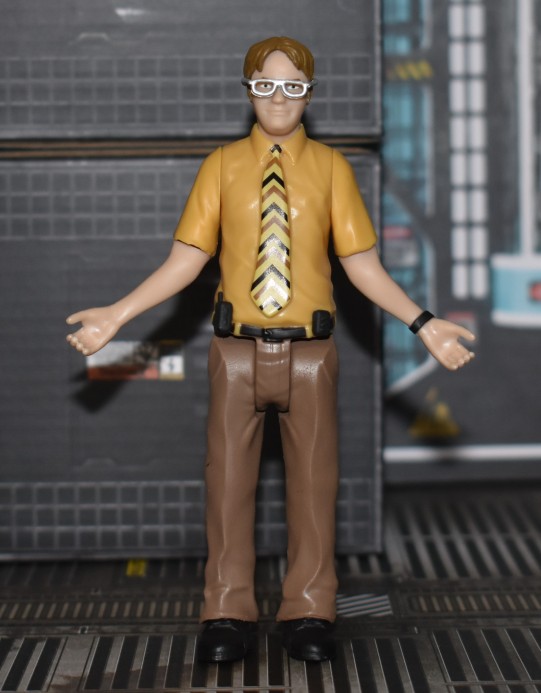 Dwight has his signature mustard-yellow shirt and an appropriately ugly tie. His belt is adorned with a cellphone and a pager, and he has a (digital) watch on his wrist.

The glasses are thick, silver frames with no lenses. I tried to find Adventure People figures with glasses, but it seems the closest the line came were sunglasses and goggles, which had opaque lenses. I feel like this is pretty much what glasses would have looked like in that line, only they would have been part of the head sculpt. These are separate but permanently attached.

Beneath that Dwight’s likeness is a bit more spot-on than Michael’s. The wide face, broad forehead, and parted bangs all look perfect. He even has a bit of a smarmy expression that’s a nice counterpoint to the Michael figure’s utterly blank stare.

Speaking of Michael’s blank stare, it’s almost unnerving. The sculpt and deco make the head resemble Steve Carell exactly as much as it needs to. The paint apps are almost deceptively clean, as everything is evenly applied and precisely placed.

Michael is in a navy suit with a bright, white shirt and a checkered tie that I’m sure is from a specific episode. The bottom of the tie is peeking out from under the jacket and is missing the checkerboard pattern, but whatever. It’s Michael Scott. Maybe he got it from a closeout store and the whole bottom half of the tie is just plain blue.

I feel like Phat Mojo was aiming for a very specific aesthetic here and they absolutely nailed it. These are fun toys with just enough style to stand out on your shelf. 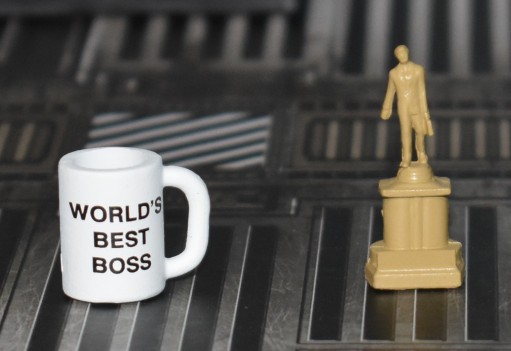 Michael comes with a Dundie Award trophy and a “world’s Best Boss” mug, while Dwight includes his bobblehead and nunchaku.

The Dundie, bobblehead, and nunchaku are all unpainted plastic pieces. The sculpts are nice, with enough fine detail to make me wonder if they might be 3D printed as opposed to traditional molds. 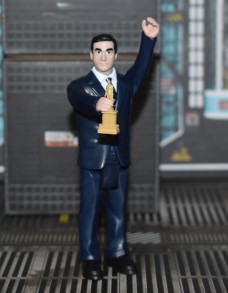 The mug is the real showpiece here, as it actually sports deco. Unfortunately Phat Mojo has done the same thing as every toy manufacturer who has ever produced a toy mug and printed the words on the wrong side of the mug. Micahel Scott is right-handed and those words should face the other way:

Is it ridiculous that this is my biggest problem with these figures and that I actually find it to be a pretty big problem?

These are great! I’d like them more for ten bucks apiece than I do for thirteen bucks apiece, but being slightly larger and more substantial than ReAction figures (which Super 7 is now charging eighteen goshdarn dollars apiece for, the price seems fair.

If you’re a fan, obviously you want these. I think I’m done, as I don’t love anyone on the show quite as much as Dwight and Micahel is a must-have despite (or perhaps because of) his sociopathic tendencies.

I will say that if Phat Mojo does a Parks and Recreation line like this I will be one hundred percent all-in.