No, it’s not some stupid new band. Or even some stupid old band. To be honest it does kind of sound like the name of some 70’s super group. But, no. The Corman-Poe cycle refers to a series of films in the 60’s by Roger Corman and based on works of Edgar Allan Poe. There’s a very good reason that I’m talking about it today though. Other than it being Halloween today, of course.

The other week Dave had me thinking about what got me into horror. Not just the things that I love now, but stuff from when I was a kid. I’ve spoken before about my ultra-permissive parents. I was pretty much allowed to watch whatever I wanted because I wasn’t easy to scare. Thinking back on it this might have come from the fact that by the time I was 10 (or however old I was when I started picking out scary stuff to watch) I had already read a lot of creepy books. My father always had tons of books around. While he wasn’t into horror novels he did have things like Lovecraft, Wells, and Edgar Allan Poe. I read all of them, but the Poe stories stuck with me. So much so that some of the first horror movies I ever saw were the Roger Corman films based on Poe’s stories. 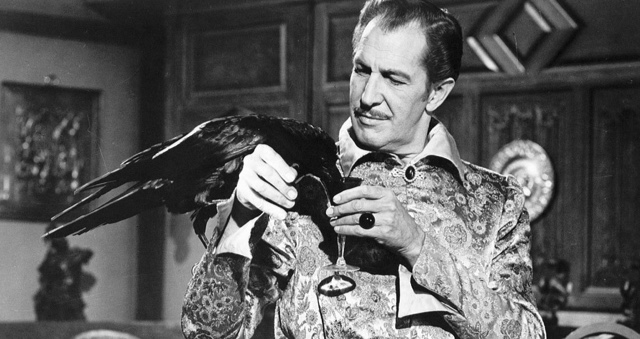 Now most people think of Roger Corman in relation to schlock B-movies of the 50’s or the SyFy schlock of the 2000’s-the nows. There was this lovely time in the 60’s though where he produced and directed some really good schlock featuring Vincent Price, Peter Lorre, Basil Rathbone, and many other notable actors of the time. I was drawn in by the stories, but I stayed for the acting. I’m sure you can understand why. If you haven’t seen them I highly recommend you give at least one of them a shot. Clearly Corman and Price worked well together as they went on to do 7 films based (sometimes VERY loosely)on the works of Poe. They aren’t scary, but they are creepy and fun.

In an interview with Dread Central Corman said “I never dreamed in a million years that 50 years later, people would still be talking about these movies. I loved making them at the time but I never knew what would happen down the road. It’s so humbling to me to be appreciated for these films but I know a lot of the reason why people do still talk about them is because of the work of Vincent Price.”

“I think one of the things that makes Vincent such an icon in the horror genre or otherwise is that he wasn’t a guy who worked under a lot of make-up like a lot of the classic heavyweight horror actors did, so it was his face that people at that time associated with the horror genre. He had such great dignity to anything he did and I think it was his stature as a serious actor that made people embrace the horror genre at that time as something more than just silly movies that scare you. In fact, Vincent’s performances made them timeless pieces of art”.

Now I’m not going to tell you whether any of these movies qualify as art, but if you only know Roger Corman from Sharktopus or Sharktopus vs. Whalewolf you’re definitely better off with these.

House of Usher (1960)
A fairly faithful adaptation as well as a little creepy. Price plays Mr. Usher, and is sympathetic as a crazy man watching his house fall. I’m not sure why they took “fall” part out of the title when adapting for the screen. Maybe to keep clear of spoilers for something based on a story from the early 1800’s. There have been remakes and redos. Don’t fall for it, and stick to the original.

The Pit and the Pendulum (1961)
This one is faithful to Poe in tone, but there’s a lot of elements from other stories too. And a bunch of stuff that was out of nowhere. That kept it from being as good as House of Usher to me, but it’s still better than any remakes that have been attempted.

The Premature Burial (1962)
The biggest problem with this one is that it doesn’t have Vincent Price. That doesn’t make it bad, but it does make it different. If the idea of being buried alive freaks you out give it a go.

Tales of Terror (1962)
My personal favorite possibly because there are 3 vignettes so no one had to work hard to drag out a short story into 90 minutes. Vincent Price and Peter Lorre are great together in the second segment, The Black Cat. It’s played funnier than it probably should have been, but the other 2 parts are dark enough that it helps balance things out. 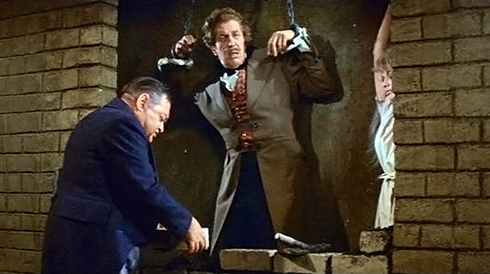 The Raven (1963)
A poem with little dialogue or narrative as a movie? Yes because they don’t add dialogue and narrative. Instead we get a whole new thing about Boris Karloff turning Peter Lorre into a raven who goes to Vincent Price for help. As an adaptation it’s not great. As a movie you can’t go wrong with that cast, and it is pretty funny.

The Masque of the Red Death (1964)
It’s a combination of the title story plus one called Hop-Frog, but still takes liberties with both of them. It’s also just beautiful to look at. I do feel like Price’s best performance in these movies is found here though so don’t leave it off your viewing list. 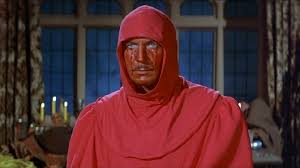 The Tomb of Ligeia (1965)
I’m not going to lie, I don’t remember this one as well as the others. From what I can recall it was good, but I guess I just didn’t like it quite as much as the others here. Looks like I’ve got something to add to my own watch list.

*The Haunted Place (1963)
Some people count this movie as the 8th Corman/Poe work, but I don’t since only the title comes from Poe (hence the asterisk). The story itself is from Lovecraft. I mean it’s not a bad movie, but if you’re on the Poe movie kick this won’t fit the bill.

If you decide to pick up one of these classics bear in mind that I was a kid when I thought they were creepy. As an adult I’d be more likely to call them atmospheric. And if there is just no way on earth that you would ever watch a movie connected to Edgar Allan Poe you need to at least watch A Bucket of Blood. It is by far Corman’s best work, and honestly kind of brilliant. But trust me, start there and work your way through the Poe movies. If you only knew Corman from SyFy garbage you’ll have a very different opinion when you’re done.