Bend-Ems have been a staple of the toy industry for billions of years now. The concept of putting a rubber form over a wire armature and calling it an action figure is cheap, visually acceptable, and easy to sell.

With a Bend-Em there are no questions about action features, articulation, or deco. What you see is what you get and what you get can range in quality from an amorphous blob that’s supposed to resemble Darth Vader to a startlingly detailed Batman that might look better than some actual action figures.

Bend-Ems can be slapped on the simplest blister cards imaginable and sold anywhere. Kroger, Target, Walgreens, Piggly Wiggly, airport convenience stores and basically anywhere that sells any kind of non-food items probably has a peg full of Bend-Ems somewhere on the sales floor.

While I often give my progression of childhood toy collecting as “Mego>Star Wars>GI Joe”, this overlooks the dozens of bendy figures I owned at any given time. The funny thing is that the first and last bendies I recall are both rabbits.

My earliest memory of owning this type of figure is of a Bugs Bunny with a carrot in his hand. That figure went everywhere with me and interacted with my Megos. I think by the time I got into Star Wars all of the wires were broken, so Bugs retired.

This is the major problem with bendy figures – if you actually play with them, at some point those wire armatures are going to break and your bendy is going to become a floppy. Depending on the thickness of the rubber you might still have a figure that can just stand there, or you might have a soft, limp character that has to be relegated to being a corpse all the time.

The last bendy figure I specifically remember having was Roger Rabbit from LJN’s Who Framed Roger Rabbit? line. This is the same LJN that produced the Wrestling Superstars line, or as you may , “those huge rubber wrestlers”. So the Roger Rabbit “Flexies” might have seemed like an innovation.

Not really, though, because LJN had been producing their own line of WWF “Bendies” since 1984.

Now that I think about it, shouldn’t the wrestlers have been “Flexies”?

Anyway, I haven’t had a whole lot of interest in bendable figures as collectibles in the last couple of decades. I’ll admit – I’ve been kind of snooty about them. Their sculpts and deco tend to be more simplistic and, if I’m being honest, my heart is still a little hurt over my broken Bugs Bunny.

Just this year bendies have caught my eye again with some licenses I couldn’t ignore. The first release that I was compelled to hunt down was this 1989 Batman:

Needless Things was celebrating the anniversary of the Summer of the Bat all summer long, which meant I grabbed every piece of Batman 1989 memorabilia I could find. This Bend-Em fascinated me because it actually looked really good.

Then I found the line that today’s figure is part of – Universal Studios Monsters Bend-Ems exclusive to Walgreens stores.

It’s funny how the circumstances of a toy find can affect your buying decision. I was going to buy a Gill-man no matter what. If they hadn’t had any other characters or even if the packaging had been banged up; I’ll buy pretty much any Creature from the Black Lagoon toys I find.

The rest of this set were sort of optional. I love the rest of the classic Universal Monsters as much as the next guy, but you kind of have to pick your guy (or gal) with these. Otherwise you’re going to go broke (and nuts) with all of the merchandise that is constantly being produced. So it was just good fortune that Walgreens had two complete sets of these in case-fresh condition.

I felt like kind of a jerk buying an extra Creature to open, thusly leaving an incomplete set in the store, but I knew I’d be reviewing it for you guys. And you all know I’ll do anything for you.

At this point you might be wondering if I’m ever going to actually get around to reviewing the Creature and thinking that this is a really long intro.

Yes, I am going to start reviewing any minute now and, yes, it is a long intro. It turns out there’s not a whole heck of a lot to say about a bendy figure so I needed to pad this intro out a decent bit.

Was this Bend-Em a worthy addition to my Creature from the Black Lagoon collection or should he have stayed at Walgreens? Read on and find out! 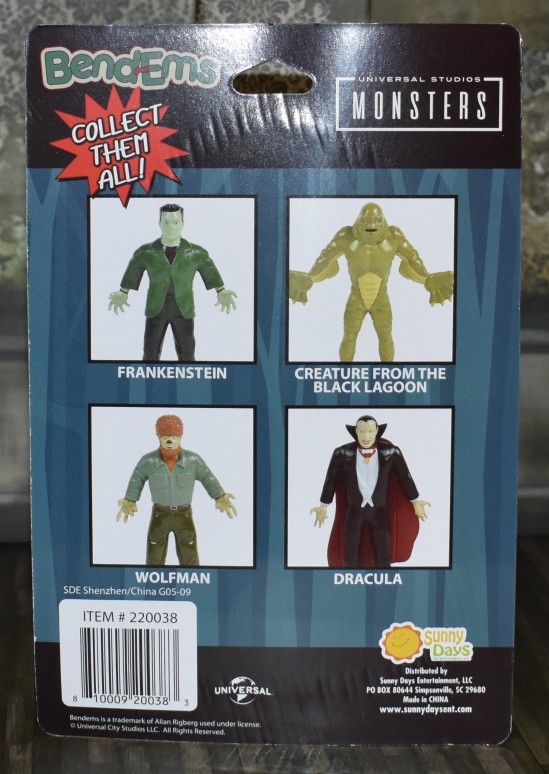 Gill-man comes on a nice, thick cardback. It’s not invulnerable and I’m sure if these spend too much time in Walgreens they’ll get bent to heck, but they’re sure better than Mattel’s WWE Retro cardbacks.

The bubble is pretty sturdy, too. The thickness and durability of this packaging is actually reminiscent of the sort of thing plumbing and hardware items.

The graphics on the card are nothing to write home about. I’m not wild about the new Universal Monsters logo. This one was far better for toys and collectibles:

The back features each figure from the set in what I’m sure would be exciting action poses if these figures could be posed. But more on that in a minute.

The overall form of this figure seems to me to be very similar to an older Creature figure – a bean-filled squeezy thing that I believe was also a Walgreens exclusive. I’m not entirely sure where mine is right now because it’s not the sort of thing you can stand on a shelf.

This one has no issues standing. It has gigantic feet and is made of a very firm rubber – much more rigid than I was expecting. Thanks to that and the fact that its physique suggest Scott Steiner is in the Creature suit, this figure is much more of a Stand-There-Stiff-Em than a Bend-Em.

It’s not without its charms, though.

The sculpt is a fun, almost cartoony rendition of Gill-man and has a surprising amount of detail for such a thing, most notably the little nubbies and suckers on the palms of its hands. The scales are nice, too, with individual scalloping around the different layers rather than just straight lines.

The paint is also nice. The Creature’s claws, belly, and fins are all precisely decorated with a pale yellow that isn’t exactly screen accurate, but does provide some much-needed highlighting on the figure. It could have very easily been all-green and that would have been fine, so I like that we got these extra flourishes.

The face detailing is impressive as well, with a nice, red mouth and white little eyes that even have irises and pupils applied. For a toy that most would consider a sort of bargain item, this Creature delivers on a higher level. I’m not saying NECA would be jealous or anything, but Sunny Days Entertainment went above and beyond here.

As for the figures flexibility, well, there’s not much.

The arms and legs can be posed a little bit, but the thickness of the rubber and the balance of the figure in any position other than standing upright make what little poseability it has kind of moot. Chances are if you even open yours you’re just going to stick it on the shelf in its default Larry David “Ehhhh…” pose.

This is a Bend-Em. There is no stuff.

Unless you do something weird like keep the bubble as some sort of little bed or something. Which I wish I’d thought of while I was taking pictures.

To be honest this thing is a little overpriced at six bucks. Four would have been great and five would have been okay. But we love our monsters and we’re gonna buy ‘em, aren’t we?

In the end, despite the price, I’m glad I’ve got this guy and his buddies. If you see them at Walgreens, jump on them. They apparently fluctuate between “scarce” and “impossible” and I know you’ll be kicking yourself if you miss out!