As I mentioned on last week’s Needless Things Podcast, I just can’t seem to choose a Star Wars line.

The less articulated basic line gives the best character selection, the Vintage Collection is the style and size I prefer, and the Black Series has finally achieved a level of quality where I find some of the releases irresistible.

If I can actually find them.

The bounty hunters – the group Darth Vader assigns to hunt down the Millennium Falcon in Empire – transcend those decisions, though. I’ve loved those character designs since I was a child, but the best thing is that they’re a small, specific group and that every Star Wars line tends to represent all six of them – Boba Fett, IG-88, Dengar, Bossk, 4-LOM, and Zuckuss. So I’ve developed a habit of just buying all of the bounty hunters when I see them, even if I’m not collecting that line.

As for the Black Series, I hadn’t intended to buy anyone but Fett. At twenty bucks a pop these aren’t the same kind of fun impulse buy as Galactic Heroes or a small LEGO set that has three of the characters. I passed on Bossk and IG-88, but then when Hasbro hit us with the triple threat of Dengar, 4-LOM, and Zuckuss (a Disney Store exclusive and therefore much more easily obtained), as well as the announcement that they would be rereleasing the first two, I couldn’t resist.

Mainly because for one reason or another I’ve managed to stock an entire shelf with Black Series releases.

Am I dumb for continuing to dabble in this line, or is 4-LOM the kind of figure that could make you question your style loyalties? Read on and find out. 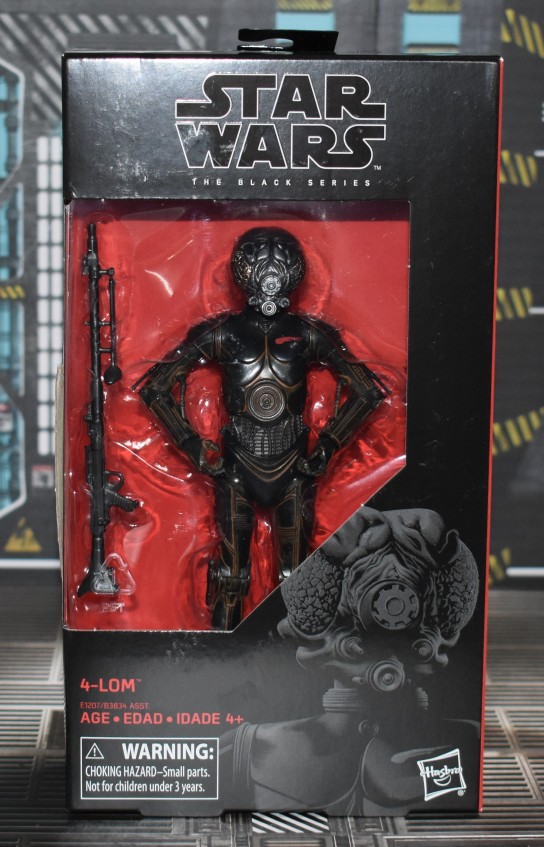 These boxes seemed so fancy when they first came out, but after years of gazing at clunkers like Greedo and Constable Zuuvio, not to mention the same red color scheme for far too long, I’m tired of it.

I also hate that Hasbro no longer features the rest of the wave on the box.

That being said, I have yet to open a Black Series figure to discover warped limbs or accessories, so if this box is the magic that prevents my toys from being damaged before I even open them, super. 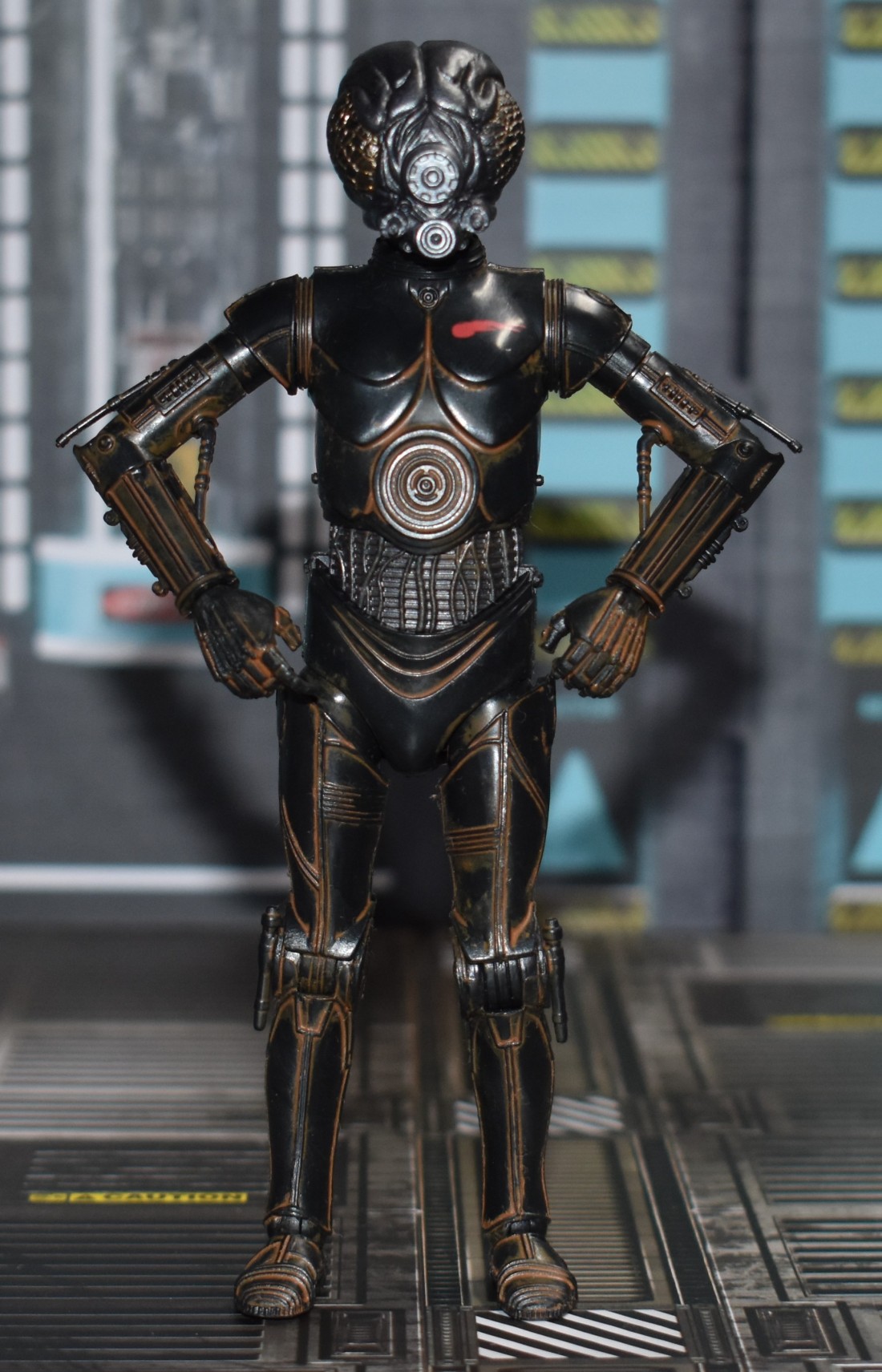 One of the obvious advantages a droid action figure has is that it doesn’t need to look like a living actor. As such it’s pretty easy to say that 4-LOM is a gorgeous figure, but it’s more than just an accurate representation of a synthetic character.

As a starting point, the sculpt is incredible. Every bit of this figure is packed with detail that a young me never knew existed on this bounty hunter. In addition to plating and seams, there are also several little bits and pieces sticking out that give 4-LOM a much more interesting profile than, say C-3P0 (no offense to Threepio, who has the advantage of spoken lines and a personality to be interesting).

Another advantage droids have over humans and even aliens is that their articulation is typically much easier to hide. Or rather, doesn’t need to be hidden at all. So the necessary joints don’t break up an otherwise successful look. Heck, in the case of the knees the 4-LOM figure benefits from the movie design because it gains a huge range of motion.

Somehow I forgot to mention the fact that when I was a kid, I found 4-LOM terrifying. Well, back then I thought he was Zuckuss because of a Kenner production error, but whatever the case, this droid scared me. I didn’t know if it was an armored insect or what. I don’t know that it even registered that he basically had a C-3P0 body, it was that insectoid noggin that freaked me out.

I’ve got bad news for Young Dave – the Black Series head is even creepier. While the mouth area definitely has artificial parts, the eyes and top of the head look even more organic. The shapes are distinctive and fascinating to examine. The same goes for the fine detail on the eyes and the “mouth”.

Of course, as we all know, a great sculpt can be rendered moot by a lousy paint job. Heck, the last several years of Black Series heads is proof of that. But 4-LOM has a phenomenal set of paint applications and colored parts.

The most stunning color is the red/orange wash that is present from shoulders to feet. Whether it’s oxidation, the accumulated dirt of a hundred worlds, or some kind of lubricant leak, it looks fantastic and adds a ton of character to the figure.

Other details like the orange in the eyes and the red symbol on the chest make 4-LOM even more fascinating and enhance the idea that this is a traveled and experienced mercenary.

Articulation-wise this figure is far better than I expected. The neck, knees, ankles, hips, and abdomen are all deceptively mobile, but the elbows are where I was truly blown away.

Rather than the static elbows you might expect from a droid action figure, 4-LOM has almost 90 degrees of movement thanks to the ingenious slider system the designers implemented for the wires that run from the biceps to the forearms. It’s such a small detail, but I spent several minutes just playing around with these to test their limitations and just enjoy seeing them work.

4-LOM has an amazing range of movement and is a whole lot more fun than a figure of a droid that just stands there needed to be.

To be honest, I’m a little disappointed with it. It looks good sculpt-wise and the figure can hold it several different ways, which is important, but it’s all one color and the stand isn’t functional. I have to say, I think Hasbro could have done a little better here. At a smaller scale this would have been a fine weapon, but at twelfth scale I expect a little better.

Oddly enough, even though he isn’t one of my favorite Star Wars characters, 4-LOM is the Black Series figure that broke me down and made me realize that I was going to continue buying these when it was a character I want.

Rifle aside, the quality is so high on this release it almost seems like it could be an import. If you’re a fan of robot toys or of the Star Wars bounty hunters, keep an eye out for this release. You’ll like it.