Because the only reason I saw Fantastic Beasts: The Crimes of Grindlewald in the theater was the promise of it having something to do with Dumbledore. I guess I’m a sucker since the movie was basically stuff, stuff, stuff – Dumbledore! Then stuff, stuff, stuff – oh hey, it’s Hogwarts! Followed by stuff, stuff, and more stuff – but there’s Dumbledore again! If you’ve read the books or seen all of the Harry Potter movies a billion times as I have you know that Dumbledore is famous for defeating Grindlewald (basically the Voldemort of his time). So why does the guy who wrote one of the Hogwarts textbooks get all the screen time? I didn’t hate this the way some people I know did, but I was certainly disappointed. It’s been out almost a month so I can’t imagine I’d be giving any spoilers by now, but considering that it’s the first of a two parter there isn’t much to spoil anyway.

I was indifferent to the first Fantastic Beasts movie. I just couldn’t force myself to care about any of those characters. Making allusions to things from the time of Harry Potter doesn’t make it a Harry Potter movie. It was also very slow, and extremely low on magic. But really it was the characters who killed it for me. Well, hooray – they’re all back for the newest film, and I still don’t care about them. Eddie Redmayne’s twitchy awkwardness comes off more as trying too hard to play someone on-the-spectrum than it does…well, whatever it is he’s trying to do. A guy who’s more comfortable with beasts than with people? Or is he simply trying to hold his own up against a heavily overacting Johnny Depp? Whatever it is he needs to dial it back a little. Time is supposed to have passed, and so Newt would have presumably been interacting with a few more people since then end of the last movie. None of the returning characters have changed or grown at all. The comic relief couple of Queenie and Jacob are amusing, but Newt’s on-again off-again girlfriend Tina is still cold and unappealing. What the movie gets right is Jude Law’s performance as the young Dumbledore (or Youngledore as I have taken to calling him). He’s not going directly from Richard Harris or Michael Gambon, but perfectly keeps the spirit of the character while making it his own. I just wish there had been more of him.

What really kept my butt in the seat long after the characters and acting might have otherwise made me give up was just how nice this movie was to look at. The beasts are bigger, cooler, and much more fun to watch this time around. There are still silly Nifflers and Bowtruckles, but more magic in this one in general keeps them from being the focus. The set pieces are more varied and the CGI is so much better than anything they managed to do in the original Harry Potter series (anyone else remember how bad that troll looks in the first movie?). But are you telling me that with a host of CGI artists at their disposal no one can make Eddie Redmayne’s lips look like they’re a different color than his face? It creeped me out on Michael C. Hall in Dexter, and it’s creeping me out again now with Redmayne. Shit, forget the CGI and hand the guy a lip balm or something for fucks sake. Sorry, little things distract me sometimes. There are times where a movie is merely pretty and brings no story to back up all that effects wizardry. Well that’s not the case here. There are about 37 different plot lines competing for your attention. There are three or four love stories, a missing member of a powerful family, the Ministry of Magic being shitty to Dumbledore, Scamander family drama, Grindlewald trying to take over the world, some nonsense about a girl being cursed to turn into a snake (that will one day become Voldemort’s favorite pet), and so much more. Too much more if truth be told. I honestly couldn’t keep up with them all. What the hell will be left for the second part? Hopefully Dumbledore taking down Johnny Depp for overacting, or being evil. Either is a good reason to me. Yes, for the issues I had with the movie I will end up seeing the next installment. I’m far too invested in the world of Harry Potter to stop now. 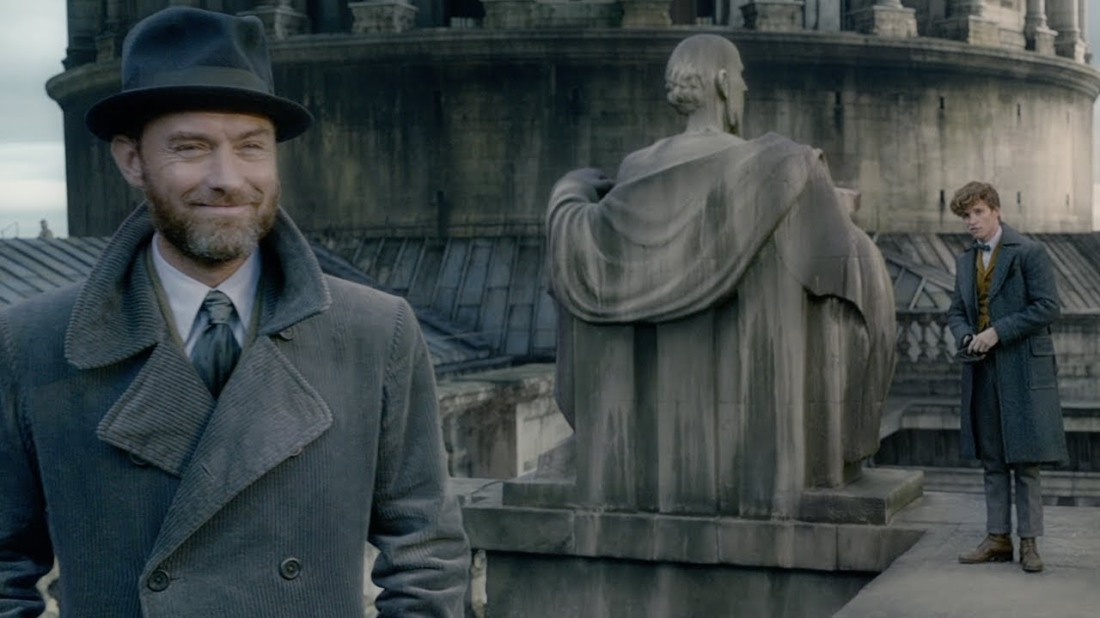 And it wasn’t a terrible movie. I need to see it again sometime when I’m not with someone who is far less into Harry Potter than I am. I need to watch it with different expectations, and I need to watch it at home when I can take a break for a while. If you haven’t gotten around to seeing it yet then by all means, do so. It’s worth watching for Jude Law alone. They could just start up another franchise solely for him and let this Fantastic Beasts thing go. I mean, if we’re turning books that were referenced in Harry Potter into movies I think Quidditch Through the Ages would be way more fun to watch. If you liked the first Fantastic Beasts you’re sure to love this one. If you didn’t then you’ll at least get to see the alchemist who created the Sorcerer’s Stone before he was immortalized on a chocolate frog trading card. That’s something right?