While Halloween has been underway since early September for some of us, October is the official start of the spooky season for many. One of the easiest and most fun ways to get into the right frame of mind is by sitting down with a big bowl of candy corn and your favorite adult beverage to enjoy some scary movies and TV shows!

Every Tuesday in October I’ll be running down some of the best spooooky releases coming to home media.

All release info is from the excellent Blu-ray.com.

Batman: The Complete Animated Series (1992-1998) – Warner Bros. – I debated on whether or not to include this since it isn’t specifically horror, but Batman is a character rooted in the ideals of the horror genre – fear, intimidation, violence. And many of the episodes of the show deal with horror tropes from killer robots and mind control to mad science and monsters.

Mostly, though, Batman: The Animated Series is an unparalleled achievement in animation and comic book adaptation and I just wanted to mention it.

The Princess Bride (1987) – Criterion – I also debated on whether or not to include this since it isn’t at all horror, but I thought it would be funny to annoy Derek in case reads this.

Plus the ROUS scene is pretty darn scary.

Mandy (2018) – Image Entertainment – Mandy is gloriously bonkers and visually mind-blowing. It could well be the best movie of 2018. It’s a must for fans of Nicholas Cage, gore, revenge flicks, and weirdo films.

Torso (1973) – Arrow – I’m pretty sure I’ve heard Eli Roth talk about this movie, and I know other filmmakers have mentioned it as well. Right now Arrow has a great track record as far as I’m concerned, so there’s a good chance I’ll be checking this Italian classic out soon.

The Incubus (1982) – Vinegar Syndrome – I had to look this one up to see what it was and it sounds intense. I might’ve been into it a couple of decades ago, but it sounds a little ugly for 42-year-old Dave.

Blood Harvest (1987) – Vinegar Syndrome – This one sounds like fun. A beautiful young girl returns to her home town, slaughter ensues, etc. The point of interest is Tiny Tim as some kind of clown that just wanders around the town. 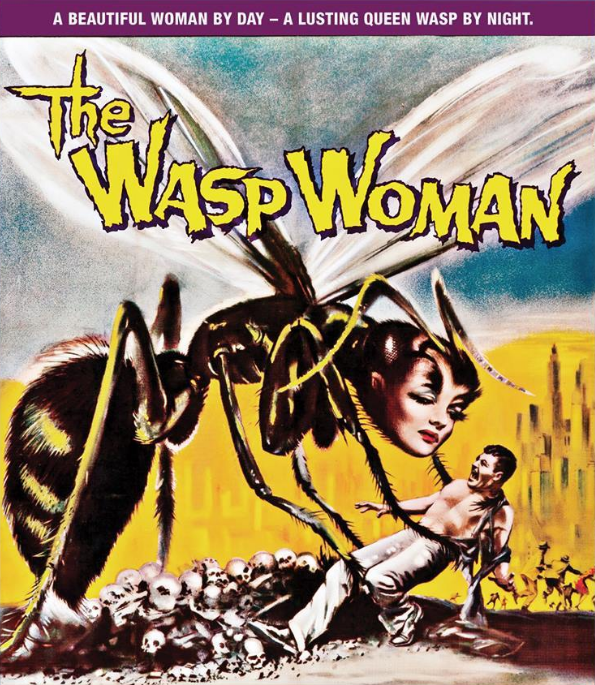 The Wasp Woman (1959) – Shout Factory – Want to hear something ridiculous? That cover creeps me the heck out. I have a pretty severe aversion to insects, and it only gets worse when the insects have human heads. I can barely even watch that last scene in The Fly.

The Killing Kind (1973) – Vinegar Syndrome – Okay, so I’m seeing a pattern here with the types of films Vinegar Syndrome seems to release and I can tell they’re not for me. And that’s okay.

Def by Temptation (1990) – Vinegar Syndrome – I know I rented this one from Blockbuster back in the day, but all I can remember is that I didn’t care for it. I was a huge fan of A Different World and I think seeing Kadeem Hardison in something like this was a little off-putting. Despite the title being completely goofy, I seem to remember the movie being played straight.

The Ghost of Sierra de Cobre (1964) – Kino Lorber – This was originally slated for release on the 16th.

I had never heard of this film, so here’s the description:

“Terrified of being buried alive by mistake, a woman puts a phone in her crypt to be able to call home if she needs help. She dies and nothing happens. One day, the phone suddenly rings. Paranormal investigator Nelson Orion is brought in.”

That sounds like some fun supernatural paranoia business! Not the sort of thing I’m going to pay full price for sight unseen, but definitely one to add to the streaming lookout list.

Slender Man (2018) – Sony Pictures – The whole Slender Man concept is certainly creepy and I’m not against modern… what’s even more fake than an urban legend? How about “made-up internet horseshit”?

Anyway, I’m not against adapting made-up internet horseshit into movies. It’s no different than adapting any other kind of fiction. But nothing about this movie excites me. It looks like the worst kind of cynical cash-in.

But I’m sure we’ll rent it anyway.

Our House (2018) – Shout Factory – Disappointingly, this is not the Madness biopic I was hoping it would be.

This is a remake of a much smaller-budgeted independent film that was, by all accounts, much better.

The Texas Chainsaw Massacre: The Next Generation (1994) – Shout Factory – I count myself as a fan of this movie, and not just because it’s fun to see Matthew McConaughey and Renée Zellweger in the insane world of Leatherface. Is it a great film? No.

Is it fun to watch? Absolutely.

WAIT. This is a Christmas movie. Sorry. I’ll come back to it in December.

The Son of Devil (2018) – SRS Cinema Exclusive – This is the most amazing film synopsis I have ever read:

He was an educated, ambitious and a poor young man. He dreamt of being admired by the whole world by his name. But, he was very poor. He found none in this world to call him friend or his relative. He was absolutely a lone person in this world. He would work among the masses.Those common people would count him as an estranged person, because if a person like him who has no permanent place to live and no income, with dreams of becoming a celebrity, he is to be called nothing but a mad man.His friends and relatives left him forever. Only one person never left him. That is his girlfriend. That girlfriend was employed in the detective department of Government. That girl intimated her senior officer about this guy. Upon hearing from her, the boy appeared before the Interview Board. But, that senior officer astonished the boy by demanding the money for the job. As a result, the boy had an altercation with the officer and he left the place. One day his only girlfriend left him to understand that he is totally useless. Being shocked, the guy was shattered in utter despair and sorrow. He became a lonely person in the entire world. One day suddenly he got a book on ‘Black Magic’ under the tree in the jungle. While reading the book, he came very much excited in ecstasy. The topic contained some rituals that would make him the most powerful man in the world. And then he started the activities by killing many people for collect their blood as coded in the book.

Happy Birthday to Me (1981) – Mill Creek Entertainment – One of the many holiday-themed slasher flicks to follow in the wake of Halloween’s success, this one is getting a Walmart (ugh) exclusive release in VHS-style packaging.

It makes a lot of sense that the company that won’t sell music with a Parental Advisory has no issues signing up for a special edition of an R-rated film celebrating violence.

Psycho Killer (2015) – ? – Disappointingly, this is not the Talking Heads biopic I was hoping it would be.

Some places list this as Lady Psycho Killer and I can’t even find which studio is releasing it. Malcolm McDowell is in it, which isn’t an indication of quality but suggests that there was at least some sort of budget.

It seems to be a sort of parody of shows like Gilmore Girls and Dawson’s Creek. Take that as you will.

Here’s a little more info from Nathan Oliver, owner of NO Productions:

Thank you guys for sharing that Lady Psycho Killer is coming out on blu Ray. As for some of the questions posed: no studio backing/100% indie, original title is Lady Psycho Killer, Lady was dropped because retailers didn’t want to have the words lady and Psycho next to each other on their shelves (Walmart and Target, specifically). The movie was the HorrorPack limited edition blu ray in March (#20), it is definitely a send up of teen dramas from the 90’s/2000’s. Response has been super mixed but I’m proud of it!

Be sure to join the Needless Things Podcast Facebook Group and let us know what you’re watching this Halloween!