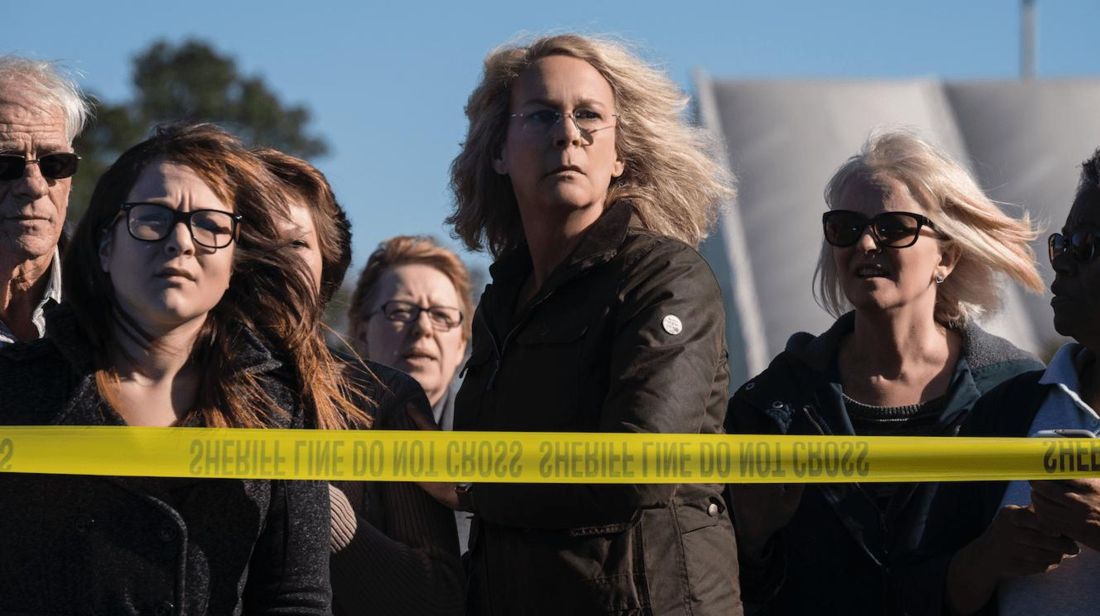 There are probably some spoilers coming up, but since the movie has been out for a week as of the time that this goes up it’s on you at this point. I mean Dave already wrote about it, so I don’t know how I could spoil it more. I’d also apologize for writing about something he’s already covered if I didn’t have such a different opinion. I hadn’t planned on writing about yet another horror movie this month, but I had so many problems with something that I was so excited about seeing that I feel like I need to talk about it. I was really looking forward to this movie, but I sadly didn’t find it as entertaining as Dave did. Apparently we’re going to disagree on movies involving Danny McBride since he hated Alien: Covenant while I liked it, and he loved the new Halloween and I was underwhelmed. I didn’t hate it, and I don’t feel like my qualms are nit-picky, but I had serious problems with the movie that others don’t seem to have.

The new Halloween pretends that sequels 2 through Resurrection never happened. I’m pretty much fine with that, but I did like Halloween 2. Whatever it takes to get Busta Rhymes out of the series is good though. Podcasters ruin everything by tracking down Michael Myers on the 40th anniversary of his 5 person killing spree, and shoving his old mask in his face. Now this is a mask that according to the new timeline he wore for one night to kill 5 people 40 years ago. How is it calling to him? But apparently it does since their appearance makes him break out of crazy jail to pick up where he left off. Laurie Strode is a prepper now who has driven away her daughter and everyone else by being obsessed with her encounter with Michael Myers. Again, one night 40 years ago leads her to believe that he’ll come back for her. Most people would be damaged by an experience like she had in the first movie, but probably not to the extent Laurie is. Anyway Michael starts killing, and at first his path of destruction is very random. I loved that, and would have liked to have seen more of it. I was completely taken out of the moment when they show Michael walk past a screaming baby’s crib without doing anything more than looking at it. Terry and I both think that there’s an original draft of the script out there somewhere that has Michael killing the baby, but the studio shot it down. I can’t picture Danny McBride wanting to let that kid live, and I didn’t get it either. Killing teens and adults is okay, but he draws the line at a baby? I don’t buy it, but overall this is probably a fairly minor thing. Michael seems to be stalking Laurie’s granddaughter than he does Laurie herself. It’s almost like he’s after her, but Laurie keeps getting in his way. The girl who plays her isn’t bad, but other than the fact that she’s nice to her crazy grandma she isn’t really developed as a character outside of her family. I don’t worry about what will happen to her or her friends. I did worry about the dangling plot thread of her cheating boyfriend disappearing from the movie. Why bother showing him cheat on her and mess up her phone if it doesn’t pay off with his death later? She could leave the school dance with her friend for literally any reason in the world other than her boyfriend being a douche. It felt like a complete waste of time that could have been filled with more killing. The other waste of time was even worse since “the new Loomis” turns out to be crazy too, and has clearly spent too much time on the Michael Myers case. There’s some shit with him trying his hand at killing, and wanting to bring Michael and Laurie together. It’s nonsense, and it was another big drag on the movie.

The showdown at the Strode home is excellent though. The tables turn, and Laurie is stalking Michael through her amazingly well designed home. Here was the only part where I felt any tension. There were times where there could have been some tension, but don’t show what should have been the best jump scare of the movie in the trailer! Michael hiding in the little kid’s closet would have been at least a little frightening, but since I knew it was coming I felt very little when it happened. But I’ve digressed again. There’s a nice moment where Michael throws Laurie out a window only to see her body gone a minute later. It’s a good callback to the original even if you do see it coming. The Strode family women finally band together to take Michael out, but instead of shooting him in the head they simply burn the house down. If horror movies have taught me anything it’s that you should always double tap a monster.

I absolutely love getting to see what happens to “the final girl” after the terror has ended. Movies never show what happens to the girls later in life, and I was happy to see someone take on something I didn’t know I was missing. Jamie Lee Curtis was amazing. She was so great at walking the thin line between crazy and scared. She is perfect, and I can only hope that since a sequel seems likely (a $77 million box office for opening weekend makes that a no-brainer) she’ll at least make a cameo in the next one. But…for someone who’s spent the last 40 years of their life preparing for Michael to finish her off she appears to be woefully unprepared for his actual appearance. Michael spends the entire movie making his way to her house. Once he’s finally there, and we think she’s ready to take him out, she get her ass handed to her. A few times. Maybe she ran out of Activia right before the fight.

McBride’s writing was a little too funny at times, and you could clearly imagine several of the characters speaking in his voice. Every time that happened I couldn’t help thinking this…

loudly in my head. Partially because it felt off, and also because that’s what I think of when I think of Danny McBride. If he wants me to think of him as a horror writer he needs to learn to insert jokes that lighten a tense moment without distracting from the movie. Like a minute long conversation between two cops about sandwiches kind of distracting. I don’t think he’s a bad writer, I just think he’s got a bit of work to do.

I guess all this makes it sound like I really didn’t enjoy the movie at all. It had it’s moments, and few fixes will put this series on a track I can really get on-board with again. I’m invested in this series, and want to see it succeed. I guess only time will tell if Michael comes back from the dead again.