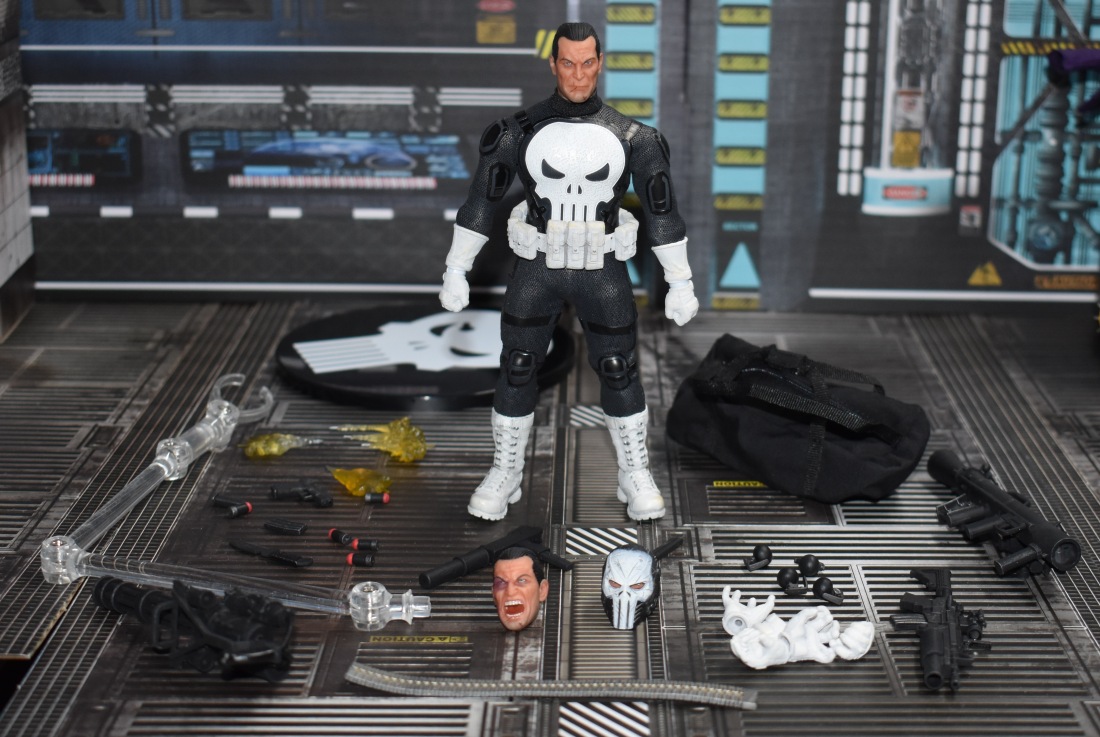 The new motto around here is “keep it simple and stupid”…

I’ve been reviewing toys for over a decade now and quite frankly I’m sick of it.

Not sick of toys, certainly. And I’m not even sick of writing about toys. But I am sick of dissecting toys and figures to the degree of what I previously considered to be a proper toy review. There’s only so much you can say about different figures from the same lines.

I don’t know exactly what form these newer reviews will take, but there’s gonna be a lot less “this figure features 32 points of articulation, including blah, blah, blah…” and a lot more “this figure has plenty of joints”. Although I might get as specific as “why the crap did they bother with double-jointed knees when the hips and ankles barely move?”

I’m not as big a fan of Frank Castle as I was when the Punisher: War Zone comic launched back in 1992 or when “Welcome Back, Frank” hit eight years later. In the last seventeen years my Punisher fandom has had two highs. The first was alongside the Thomas Jane movie; not because of the movie but because seeing that movie was supposed to be my first date with the soon-to-be Mrs. Troublemaker.

The second was ten years ago and due to Lexi Alexander’s awesome Punisher: War Zone starring Ray Stevenson as Frank, my favorite on-screen portrayal to this day. Although to be honest I’ve yet to see a bad Frank Castle. Dolph Lundgren, Thomas Jane, Jon Bernthal, and Stevenson have all brought different things to the character while remaining true to the core.

This Punisher, however, puts me in mind of those old 90s War Zone comics, and that’s why I had to have it.

THE BOX
Mezco has – again – streamlined their packaging.

Fine by me. I loved the old boxes, but I have to admit that they were unnecessarily extravagant. The last two figures I’ve gotten came in regular boxes with much smaller plastic trays. 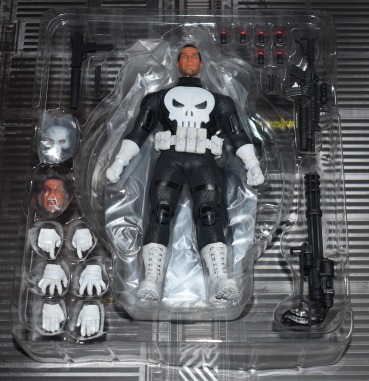 For the most part people don’t buy these off a shelf, so there’s no reason for the packaging to be spectacular and eye-catching. Especially these internet-exclusive releases.

The figure lives up to the standard Mezco has set with its other releases. Plenty of joints that work mostly well – the ankles still aren’t amazing and for some reason they still haven’t beaten that Dark Knight Returns Batman – and let Frank do pretty much everything Frank might need to do.

I’m going to have a tough time deciding whether to display the figure with the screaming head or the mask. They’re both excellent, but the mask does make this feel like a unique and different figure from the other one I have.

Of course, the suit is also wildly different. It’s what really sold me on the figure and gave it that War Zone vibe.

The bodysuit has lots of great detail. In addition to the texturing, there are portions that look like a sort of soft armor plating. It’s the same kind of magical fabric printing that Mezco has used to great effect on other One:12 releases.

It’s interesting to me that this version’s skull emblem is a tampo, while the standard release has a sort of breastplate. This one does look excellent, though. The texture in the white portion gives it a great depth and a sense of utility beyond just being a huge skull. I’m also always a fan of the pouches looking like the emblem’s teeth. 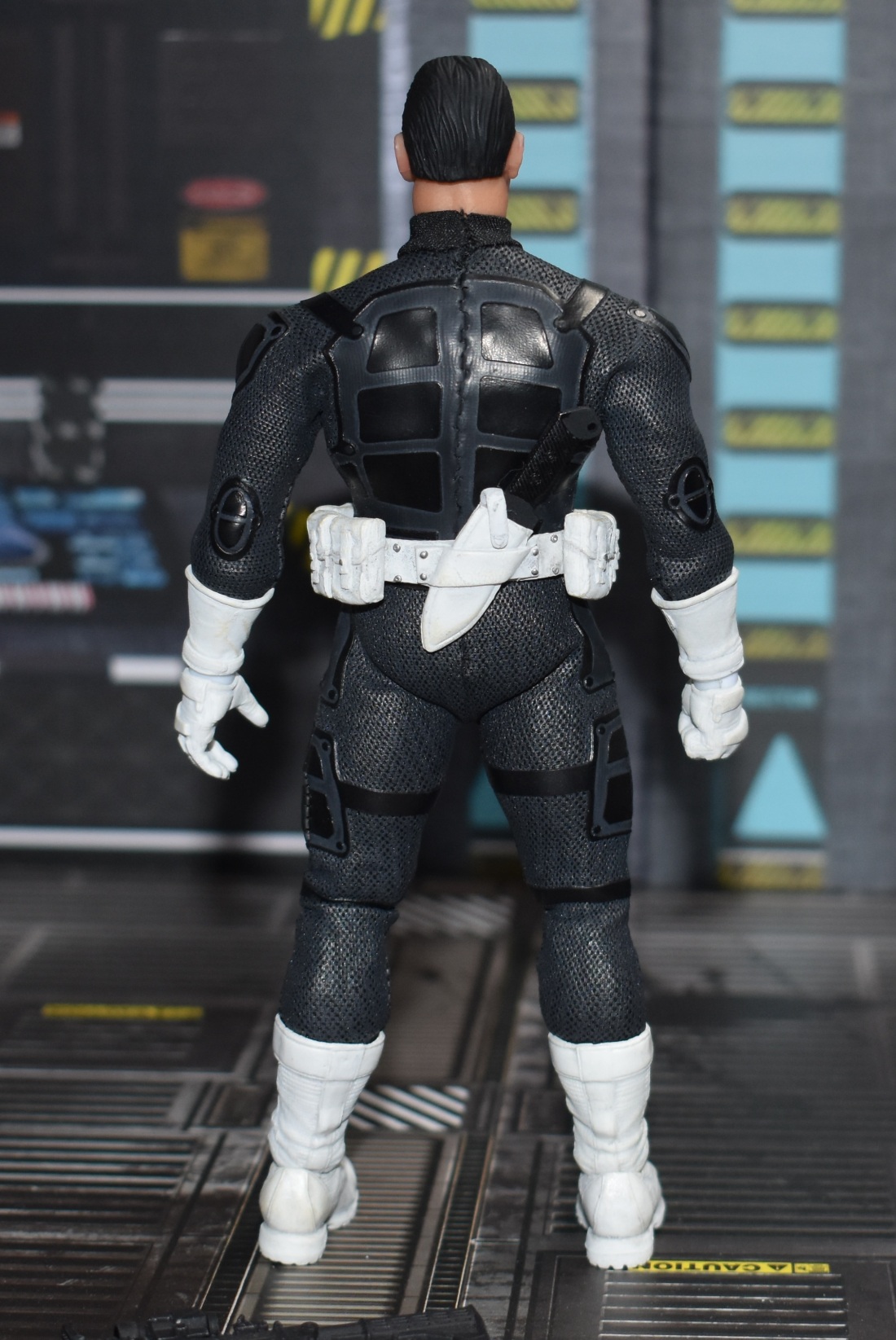 The gloves, boots, and belt are all bright white, but with a wash to dull them down a bit. The eyelets on the boots look great, and the pouches are so good it almost seems like you could open them. The gloves have sculpted weights that make them interesting. There are three sets of extra hands in addition to the default fists.

One note – the right shoulder on my figure is completely dislocated.  Since the bodysuit doesn’t come off I can’t tell what the issue is, but it’s completely out of the socket. I submitted a return request to Mezco, but my hopes are not high. I’ve rarely had good experiences with toy companies’ customer service.

I’ll update you on how it goes.

UPDATE: I received an email from Mezco customer service stating that it was outside of their 10 day damage return window ad that they were sorry for the inconvenience. Obviously this is not acceptable and I will be following up.

NEW UPDATE: I called Mezco on the phone and the guy was SUPER nice, explained that the issue with exclusives was how few they kept for damages, checked with the warehouse, and is sending me a replacement body. SOLID.

I still feel like the original email was a bit curt, but I understand that’s how businesses do things. Some folks would have given up then and that would have saved them time and money. But I NEVER GIVE UP until I do.

This Punisher is loaded for war. I don’t think it’s as much stuff as the original deluxe version with the trenchcoat, but it’s pretty darn good, especially considering this one was eighty-five bucks.

All of the guns look amazing and work well with the clips, grenades, whatever. The paint on everything is outstanding, with tons of detail and wear painted on. Nothing here is just black plastic. It’s so good they could pass for metal. 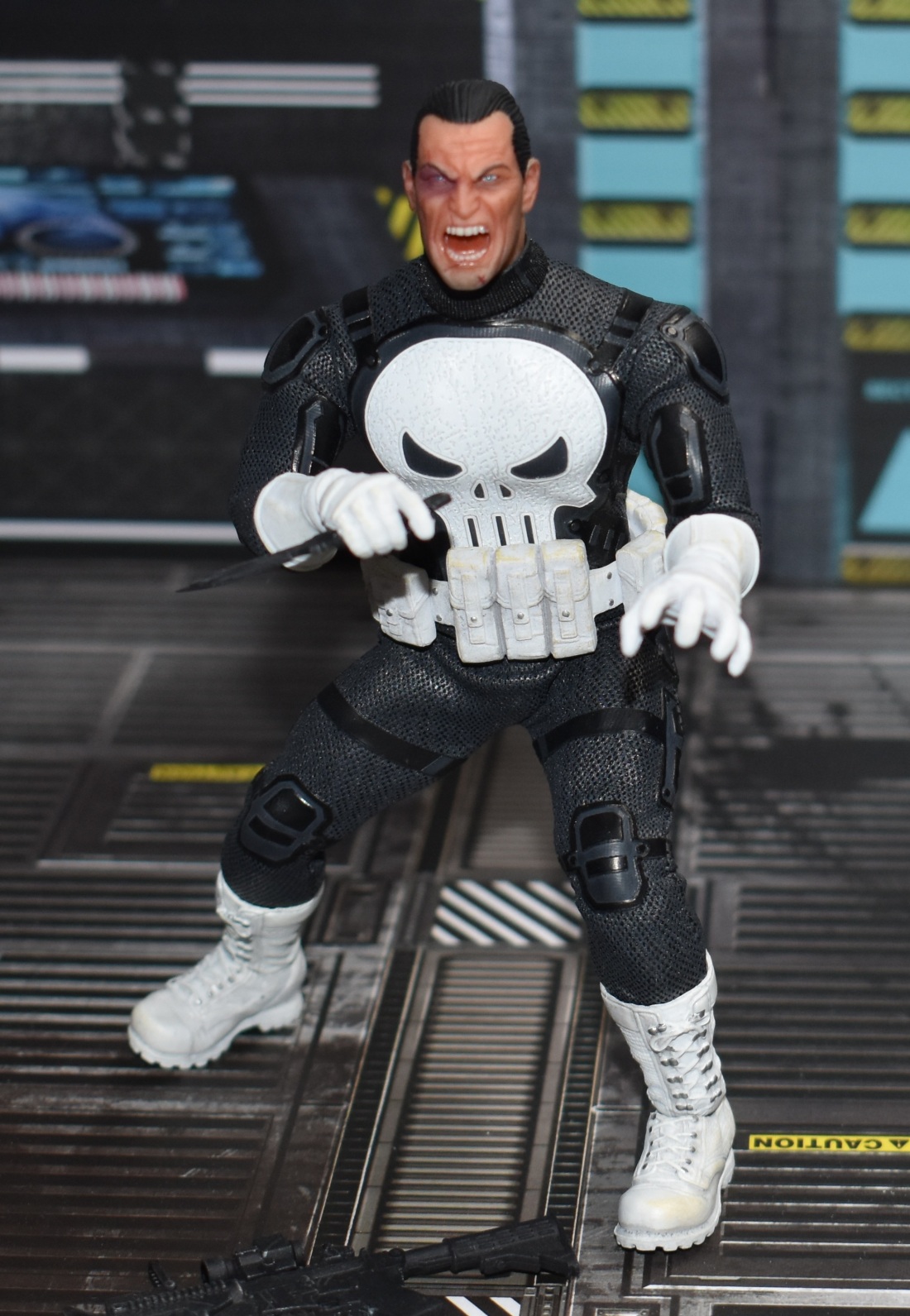 The figure can hold the various weapons in the different hands – nothing is a struggle. I wish there was a holster for the pistol, but literally everything except for the RPG can fit into the duffle bag. The duffle bag has a functioning zipper and a shoulder strap. It’s great. I love duffle bags for action figures. The old Mage figure from Graffitti is one of my favorites because of that duffle bag it came with.

There are three different bullet effects that can plug into the various gun barrels. They look frigging amazing and if Mezco wants to release an accessory pack featuring thirty different versions, I’ll buy it.

THE VERDICT
This is an excellent Punisher action figure. Maybe the best. My assumption had been that it would replace the standard figure I already own, but I like having both of them.

This was the summer convention exclusive, so there’s pretty much no way you’re going to get one for a reasonable price at this point. I always feel kind of bad reviewing stuff like that, but exclusives always give me just a bit of extra glee that helps me get through the review.